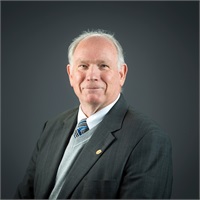 It has been said that one is the sum total of their life’s experiences. I believe however, it goes beyond one’s own experiences to include those who are influential in our lives. Consequently, my story begins with my parents whose values were influenced heavily by the “Depression”. During those hard years my parents through perseverance, thrift, and hard work were able to put my father through Utah State Agriculture College. Mom, despite not having had the opportunity to graduate from high school, saw the value of education and worked long hours in a laundry for 10 cents an hour to provide income. Dad studied hard and earned a degree in Soil Science. The most compelling circumstance in my mind is they did this while living in a tent in Logan, Utah, where winter temperatures of minus 20° F. and below are common and summer temperatures often exceed 100° F.

After graduating from high school, I had the opportunity of attending Utah State University where I met the next major influence in my life, my wife Joyce. Joyce’s life was shaped not only by her parents, but by the mid-American values of Council Bluffs, Iowa where she grew up. With the work ethic that we had developed, we both completed our bachelor degrees, Joyce’s in Education and mine in Food Science and Business Administration (double major). We have been married over 30 years now and life has been filled with interesting yet challenging times. Chief amongst them has been Joyce’s health. She has had to fight the affects of the debilitating disease of MS for over 20 years. Our path together has not been the easiest, but we have learned to pull together, each giving what they can, and for that our journey has been made easier and we have been indeed blessed.

At the time of our graduation from college we were already blessed with two children and over the next several years added four more to our family. As the parents of six children we found ourselves living in Los Angeles where it became clear that if we wanted to raise our children the way we desired we needed to make some changes. So at age 40 and with six children in tow we moved to Corvallis, Oregon where I enrolled at Oregon State University. Over the next five years with a great deal of support and help from my family I completed a MBA degree and subsequently a Ph.D. in Family Finance. Interestingly, but not unexpectedly, all six of our children have gone on to college.

Last but not least, Joyce and I have been given the opportunity to be the grandparents of some of the most precious grandchildren you’ll ever see. We now see our mission in life is to impart those lessons of hard work, persistence, honesty, thrift, and belief in one’s self onto the next generation.